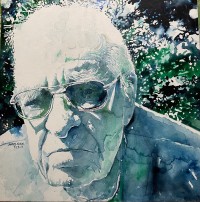 Professor James Kirk was a long time friend, mentor, and supporter of River Gallery.  Most of the partners were his students in the days when Western Oregon University was Oregon College of Education.  He will be greatly missed.

“Saturday Evening Post” best magazine on the coast; only a nickel, half a dime, keeps you reading all the time.” With this ditty, Kirk, age 4, began his lifelong career as a “salesman” when he and his older brother delivered newspapers and sold magazines in the neighborhoods of Los Angeles.

Leo James Kirk was born July 17, 1925, in Whittier, California, to Esther Moscowitz Kirk and to Heagle James Kirk. He is one of the Pacific Northwest’s most beloved and prolific artists whose work is featured in numerous public and private collections throughout the United States.

A long time Oregon resident, he had a lengthy career in public and private school art education. Students will recall his quick wit and eagerness to encourage them based on his personal philosophy that “everyone can learn to draw, provided one is willing to learn to see.” He began his teaching career in Oregon at Oregon College of Education, Monmouth, in 1963, saw the school change names two times, and retired 25 years later as Professor Emeritus of Art from Western Oregon University. He continued to teach art education for the next 10 years at Oregon State University, Corvallis, and is fondly considered a mentor and friend by numerous artists and teachers.

Having celebrated 95 years of art and life, Kirk’s path towards becoming an artist is rich with stories. He spent his early days in Southern California. He served during WWII in the Coast Guard as a radarman aboard US Navy ships where most of his action took place in the Pacific Theater. While aboard the USS Hunter Liggett he participated in the invasions of Guadalcanal and Bougainville in the Solomon Islands. He served on the USS Burlington, a patrol frigate, on missions up and down the coast of New Guinea.

Upon his honorable discharge in 1945, he took advantage of the GI Bill to advance his education. Numerous placement tests revealed high scores in persuasion – a salesman. He intended to study accounting, but a wise professor told him, “If I could draw like you, I would major in art.” He graduated from Washburn University, Topeka, Kansas, with a BFA and later earned a Masters of Arts from Colorado State College, Greeley, Colorado. He interviewed for his first teaching position in a Kansas funeral parlor and was hired. Kirk loved teaching, always claiming that a good teacher had to be a good salesman.

He was preceded in death by his parents, his brother Lewis, his beloved daughter Susan Kirk Davalt (Michael), and the mother of his children, Joan Boylan.

He is survived by his daughters Linda Kirk Fox (Wayne), Watkinsville, Georgia, and Nancy Kirk MacGregor (Gil), Portland, and by his wife of 47 years Alice Trower Kirk.

For more on James Kirk, see the following link: