Paul Gentry was a printmaker, painter, and mixed media artist whose focus was depicting the rural landscape that surrounds his home and studio in Independence, Oregon.  He began specializing in wood engraving in 2001, a form of relief printmaking known for its technical precision and demanding technique.  When not making prints, he devoted time to painting in acrylic and watercolor, as well as working in other mediums, including assemblage and hand-built ceramics.

In addition to his involvement with the River Gallery, Paul was represented in Portland by Print Arts Northwest and the Portland Art Museum Rental/Sales Gallery and in Seattle, by Fine Impressions Gallery. He exhibited extensively, including the national Small Works Exhibition at Washington Printmakers Gallery in Washington D.C. and the Portland/Nicosia International Print Exhibition at Opus 39 Gallery in Nicosia, Cyprus. Gentry is a member of the Northwest Print Council and the Wood Engravers Network. 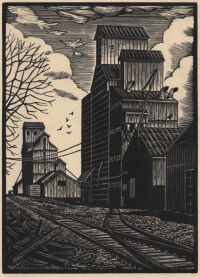