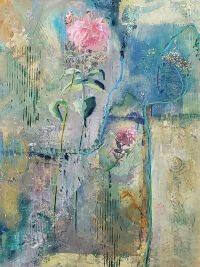 Carolyn has been interested in art since childhood and originally entered college as an art major but changed to science early on. She didn’t start painting professionally until 1980.

She has had numerous solo, group, featured artist and invitational exhibitions and has won awards and honorable mentions throughout her painting career.  Her artwork can be found in private and corporate collections nationwide, and her paintings and prints can be seen on-line at carolyncanoy.com. Currently her work is on exhibit at Elsinore Gallery in Salem, OR and River Gallery in Independence, OR. She also participates in the annual Southminster Show in Portland, OR.

I have nothing profound to say about making art, she says. I’ve done it as far back as I can remember, because I’ve never had any choice in the matter. As with most artists, I think, it’s a driving force.